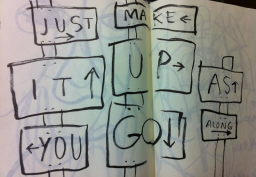 I often run my tabletop RPG sessions completely improvisationally, starting with a single encounter idea and no other preparation. I just riff from there. Here are 7 single-encounter adventure hooks I've used repeatedly throughout the years for this. I hope you find them helpful!

1. Thieves in the abandoned hillside house

While traveling to the big city for a festival or some other event, the camping party is robbed at night. They wake to find several of their valuables gone. A poorly concealed trail leads to a decades-old doorway in a nearby hill. The first chamber within the abandoned hillside house serves as a makeshift lair for a pair of thieving ophidian humanoids. If the party can defeat the pair and recover their valuables, will they choose to explore deeper into the hillside?

The party is hired by a wealthy family to transport an heirloom to a nearby town where the family's black sheep was recently sent in shame. The matriarch warns that moving the heirloom might be dangerous. Generations of family stories tell of tragedies befalling caravans carrying the unlucky heirloom, all under strange circumstances. During the first night on the road, the party is assaulted by an invisible assailant slashing at them with an unseen blade. If they survive the first night, what danger awaits the next?

While the party is visiting a small town, chaos erupts after a pit opens mysteriously in the night. This pit, in the center of the town's green, has paved walls and a spiral stair descending down. It is clearly the work of magic; it could not have been dug or built overnight. The pit's bottom appears to be a study or office full of furniture and a closed wooden door. Once the party descends into the pit to investigate, a desk (actually a mimic) attacks! How did this pit arrive? Who or what is behind it? The answer lies beyond the door.

4. A loved one goes missing

One of the party member's siblings has gone missing! They were last seen in a seedy pub they had no place being, talking to a known thug in the local thieves' guild. It's a classic kidnap and ransom setup, and the ransom is that the party must break a prisoner out of a nearby town's jail for the guild.

While traveling along a wooded road, the party spots a very juvenile dragon flying above, carrying a goat and a sack full of gold. The goat's terrified bleating indicates the dragon's lair is nearby, and the party has little trouble following the sound to find it. As they make their way into the lair, whether to steal the gold or attack the dragon, both vanish suddenly. The party finds themselves instantly trapped inside a steel cage! The dragon and its gold were an illusion made by an old troll witch, meant to lure adventuresome travelers to her cage where she can hear their stories before eating them. How might the party escape?

A famed adventurer visits town riding atop a magnificent, magical horned creature none have seen before. For the cost of a few drinks, she tells the party the secret to finding the creatures and to taming them, leading them deep into a distant forest where they must survive a far less friendly creature first.

7. Bring your sage to work day

A renowned sage is offering for sale the location of a powerful magic weapon. The information is affordable but comes with a catch: the party has to accept a geas to bring the sage along and safely bring him home. He complicates an otherwise simple trip to loot a lair.

Half ogre, half human, all dork (he/him)

Howdy folks! I'm Drew. I'm married to Deirdre and am a dad to 6 great kids.

By day, I help engineering teams do their best work and have their best careers, focusing on HTTP APIs, distributed systems, and developer tools & experiences.